* Product images are for display and demonstration purpose only, actual bottle design, label, packaging and current batch release or proof may not be the exact same as the product shown above and may be updated without notice. 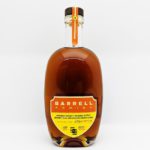 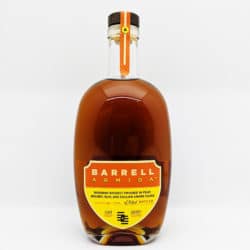 Barrell Armida Bourbon Finished in Pear Brandy, Rum, & Sicilian Amaro Casks 113.9 Proof 56.95% Alc/Vol
Armida is a blend of three Straight Bourbon Whiskeys finished separately in Pear Brandy,
Jamaican Rum, and Sicilian Amaro Casks. The ripe floral pear notes provide a soft entrance into a
Whiskey that is adorned with hints of spice and arid citrus derived from the Amaro casks (and also the
Toasty bourbon itself). This mélange of flavor is framed by the tropical sweetness found in rum-finished whiskeys.
Armida is a journey for the palate: from a brisk northern orchard to an ancient
The island, ends up exactly where we intended, with an immensely complex and satisfying whiskey.

Appearance: Bright gold with a pale rim.
Nose: Opens with creamy and sweet notes of carrot cake, dulce de leche, and chestnut honey. The pear brandy’s influence inflects the core aroma, with poached pear leading blackberry and dried lime peel. Shimmering at the edges are countless herbs and dusty spices. Notes familiar to Sicilian amari, such as fennel seed, aniseed, nutmeg, and cacao are there. As Sicily was once part of the Duchy of Savoy licorice, wormwood and chamomile are encountered here, in Savoy’s tradition of genepy and absinthe.
Palate: Lush sweetness is kept in check by some sandy tannin and high strength. Here, the rum takes center stage, with blackstrap molasses, sambuca, and olive brine arriving first. The rich dark character builds with date and chipotle leading into pipe tobacco and walnut. The amaro is never far behind, exhibiting licorice root, gentian, green cardamom, and kola nut.
Finish: Green almond enriches an otherwise dry finish of black tea and slate.

home
wishlist
account
has been added to your cart.
Checkout
Join Waitlist We will inform you when the product arrives in stock. Please leave your valid email address below.